INTRODUCTION
On Tuesday 3rd December 2019, 60 students with 2 technicians and 1 lecturer went for a trip to Tata Chemicals Magadi Limited, with an aim to learn the occurrence and processing of Trona. We arrived there at 12:30 pm. We had planned to visit the Trona processing Plant and also Lake Magadi to see the raw Trona when extracted.
TRIP OBJECTIVE
The objectives of the trip was to get to know the company in more details in terms of extraction, processing and even marketing of trona. We also had an objective of knowing the role of geologists in the company.
FACILITY DETAILS
Tata Chemicals Magadi Limited is located about 120 km South West of Nairobi and can be accessed through Magadi Road. The area is relatively hot, at an altitude of about 590 – 600 m above sea level. It receives low rainfall. We found out that mining of trona in Lake Magadi started in 1911 when it was mined by Magadi Soda Company Limited. However, in 2011, mining of trona was taken over by Tata
Chemicals Magadi Limited. It is Africa’s largest Soda Ash Manufacturer and one of Kenya’s leading exporters.
FINDINGS/OBSERVATIONS
At Tata Chemical’s Magadi, trona (Naturally-occurring Sodium sequicarbonate) is obtained from the lake by dredgers set up at different locations on the lake. The trona crystals form a crust about 40m thick at Lake Magadi.
Deposits about 500 mm in diameter are dredged out. These are crushed into smaller pieces of about 100 mm in diameter before being slurried and then pumped to the washery plant.
Dredgers are fully equipped with crushes and pumps connected to pipelines to the washery.
At the washery, the raw trona is washed and blended so as to meet the required specifications.
The crushed refined trona is then transported by conveyor belts to large rotary kilns at the calciner plant where the main chemical reaction takes place to produce soda ash, carbon dioxide and water vapour. From here, soda ash is conveyed to large silos after grinding, screening and grading.

At the silos, the product is bagged in 50 kg bags for sale in local market and the rest transported in special rail wagons to Mombasa. Soda ash is transported by rail from Magadi to Mombasa. Tata Chemicals manages the railway line from Magadi Station to Konza Station
where their rail joins the Nairobi-Mombasa railway managed by Kenya railways Company
Limited.
Tata Chemicals produces over 1000 tonnes of Soda ash daily and over 360,000 tonnes annually and is transported daily to Mombasa.
Mapping of the volumes of trona at Lake Magadi has been done by geologists working in the company but the lifespan of the mine could not be determined. This is because mined trona is able to regenerate after about 10 years to the original volume. It was also noted that the amount of trona currently is more than it was initially in 1911 when mining began.
The major impurities found were Sodium Chloride (Halite) and Sodium Fluorite. From their Mapping, geologists at Tata Chemicals Magadi found out that the Southern Part of the Lake contained more impurities while the Northern part of Lake Magadi towards the Nguruman  Escarpmentswere the purest. Trona is therefore mined at the Northern and Central parts of the lake, about 10 km from the main plant. We could not reach this place since it was too far to go by foot and vehicles more than 3.5 tonnes, like our school bus, could not go there.
Halite (Sodium Chloride) crystal deposits occurred at the Salt Pans at the Southern part of the  lakenear the Main plant. Low precipitation and high rates of evaporation of up to 400 mm
per annum, makes crystallization process take place naturally. Crystallization at the salt pans depend highly on climate. The crystals are manually harvested and taken to another small plant nearby for processing and grading after which they are sold in different salt markets.
Apart from what we learnt at the plant, we also found out that the lake was relatively shallow, that in dry seasons, one can actually drive across it, while in rainy seasons, the water level
was not more than 5 meters high. As we were told, Hot Springs of up to 90○C are at the Northern end of the lake too.
We also found out that Chert, a sedimentary rock, among other rocks, occurred in the area.
About 30-20 km before we reached the lake, we were able to look at various geological features resulting from processes like Faulting and Erosion.
CHALLENGES EXPERIENCED
The major challenge we had was lack of the minimum safety gear required by the company.
We did not have Helmets, Safety Goggles, Reflector Jackets and some students did not have safety boots. We therefore, were not allowed into the processing plant, but were taught what was being done by the company outside the plant.

CONCLUSION
Our trip ended at 5 pm. It can be concluded that the trip was successful and we believed that  our were achieved. We learned something new and beneficial for us. It was a well recommended trip for learning Materials of the Earth (SGL 101), Sedimentary Petrology (SGL 303), Industrial Rocks and Minerals (SGL 403) and Mineral Exploration and Mining (SGL 411).
We therefore would like to express our special gratitude to the College Principal, the Chairman Department of Geology, our Patron, Lecturer, Technicians and the students for the success of this trip.

It is difficult to believe that Lakes can be coloured if you have not seen them. In Kenya, there are lakes with different colours. Here are some of the examples:

Located on the Southern Part of the Great Rift Valley, it has a bed made almost entirely of solid soda or semisolid soda. This lake turns pink during the algal blooms. It is near Lake Natron in Arusha, Tanzania, that also turns pink.

This lake forms a Bright Blood Red colour that has inspired some myths in the communities living around it. The lake is located at the Southern end of the Suguta Valley.

The colours of the Lakes above are due to Dunalliela algae, Dunalliela salina, that thrive in alkaline saline water of the Lakes above. The algae is green in colour when exposed to salinity but turns red in high salinity and light intensity. In these conditions, the algae produce protective carotenoids in their cells that are responsible for the bright colours in the Lakes.

Do you know of any other lake that is coloured? Let us know in the comments below.

Stromboli, a small island north of Sicily, is one of the most active volcanoes in the world and famous for its normally small, but regular explosions throwing out glowing lava from several vents inside its summit crater. This activity has been going on for at least 2000 years, as long as there is written memory of the activity, which Stromboli lended its name to, the so-called strombolian activity.
The N-most island of the Eolian Islands is famous for its spectacular incandescent nighttime explosions, that have long attracted visitors from all over the world and brought the volcano the nickname the “Lighthouse of the Mediterranean.” Stromboli has even given its name to this kind of typical small explosions. 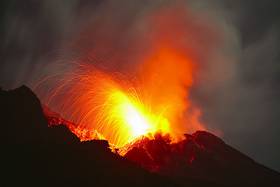 Cinnabar is a Mercury Sulphide mineral with a chemical formula HgS. It has a bright red colour and a Moh’s hardness of 2-2.5. Cinnabar was originally used as a pigment and cut into jewellery. However, due to its toxicity, these uses have been discontinued.

Cinnabar is a hydrothermal mineral precipitating from ascending hot waters through fissures and forms at low temperatures of less than 200 degree centigrade and at shallow depths. It is associated with Igneous Rocks.

Currently, Cinnabar is used an an ore of Mercury, where its powder is heated in a kiln and mercury vapour sublimes. 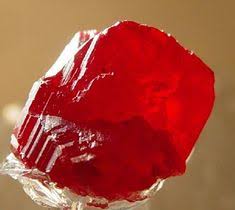 Metacinnabar is a polymorph of cinnabar. It has the same chemical composition (HgS) as cinnabar but a different crystal structure. Cinnabar is trigonal, while metacinnabar is isometric. The two minerals should not be confused with one another because metacinnabar has a metallic gray color, a gray-to-black streak and a metallic-to-submetallic luster.

Other forms of cinnabar are:

Did you know that Cinnabar means Dragon’s blood?

Volcanoes have inspired and frightened humans for centuries. They have been a center of folklore and myths for thousands of years. One volcano has surpassed all the other volcanoes in reputation thanks to its incredibly beautiful lava. the Kawah Ijen volcano in Indonesia’s Java island is seen as spewing bright blue lava at night. This colour is seen due to the burning of Sulphur from the volcano that burns with a bright blue flame. Kawah Ijen volcano is part of the complex volcanoes in Banywang Regency in Java. 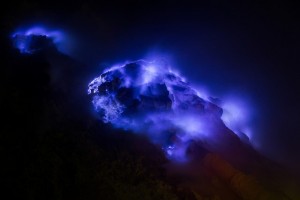 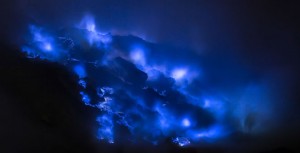